Sometimes people want to know what someone’s setup is. I will be making some large changes soon, so I want to take a current log of my computer-related hardware.

I have two computers that I use daily. 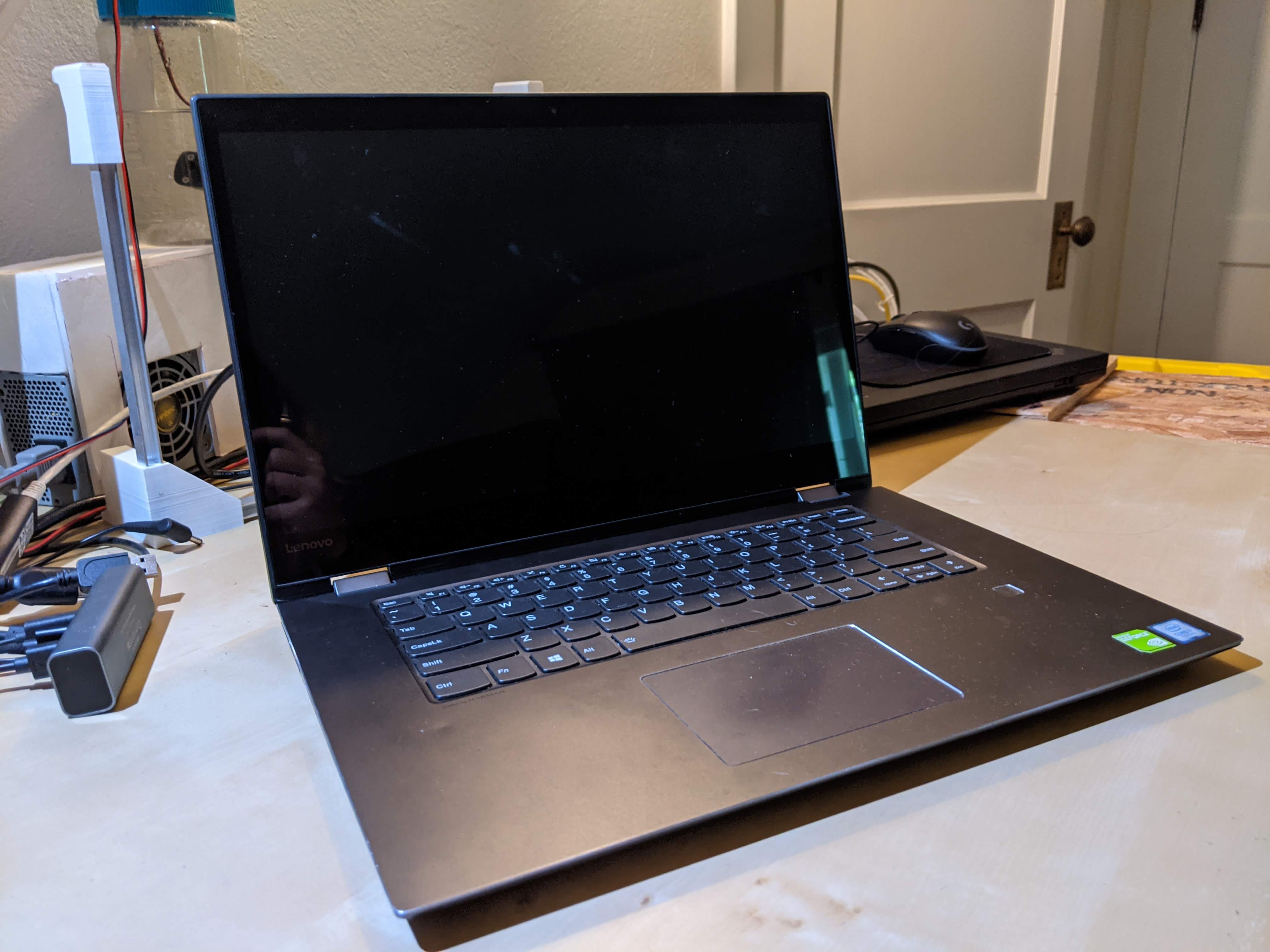 This is the main laptop I got at the end of high school. The classic “college laptop”. It was $999 at Costco. I was looking at stats and obsessing over components. My selection came as a result of several things. First, my dad had warned me several times about HP laptops. Friends don’t let friends buy an HP, or so the saying goes. My price range was about a thousand dollars, so Razer and MSI were pretty much out of the game. Main manufacturers left on the table were Dell, Lenovo, Acer, Asus, and whatever else. I don’t remember every part of the search.

I knew I wanted some kind of discrete graphics card, as gaming and CAD were both very important to me. However, at this time the GeForce 1080Ti was the peak of performance, and the insane jump those cards had was…not clear to me. Only the future would tell how big the difference between a laptop GeForce 940 and any of the 10-series cards was. Or the $200 increase in price was just too much. Either way, thats probably one of the main regrets I have, I should have sprung for a better graphics card. But this one has been functional.

I started looking into more things, like the chassis material (metal preferred), pen support (really desired), convertibles (not necessary, but cool). Lenovo and Dell had some of the best options here, with the XPS line and the Flex line nearing my price point. I also still stand by that the 15 inch screen is the best size, anything below that starts to feel cramped for multi-window workflows. This also was the size where discrete graphics cards started being introduced to the chassis.

I ended up really using the convertible and pen a ton in college, so easily worth it there. Unfortunately, the 15 inch display was a bit unweildy for use in class. The desks at college were often unusually small, and the laptop just weighed so dang much that it was often easier to go without it when running or skateboarding to class. However, back at the dorm, it made doing online-submitted homework (almost all of it) that much easier. However, one friend’s 14-inch flex model is WAY more handy for doing quick notes in class, and is both thinner and lighter. However, it was a 2019 model, and did not have discrete graphics. It would have been cool to reach a nice middle ground, but the bezels werent there yet.

The main problem I have with it now, four years later, is the thermals. I still use it in 2021 to play games, and the graphics card has enough grunt to get by on low settings…..until it starts thermal throttling. I currently have a custom fan setup that shoves air in the intake side, and have recently added an aluminum water block to really take the heat out of some metal parts of the laptop that were getting close to burning me. Playing modern AAA games takes way too much effort for this thing. But its all I have for now. 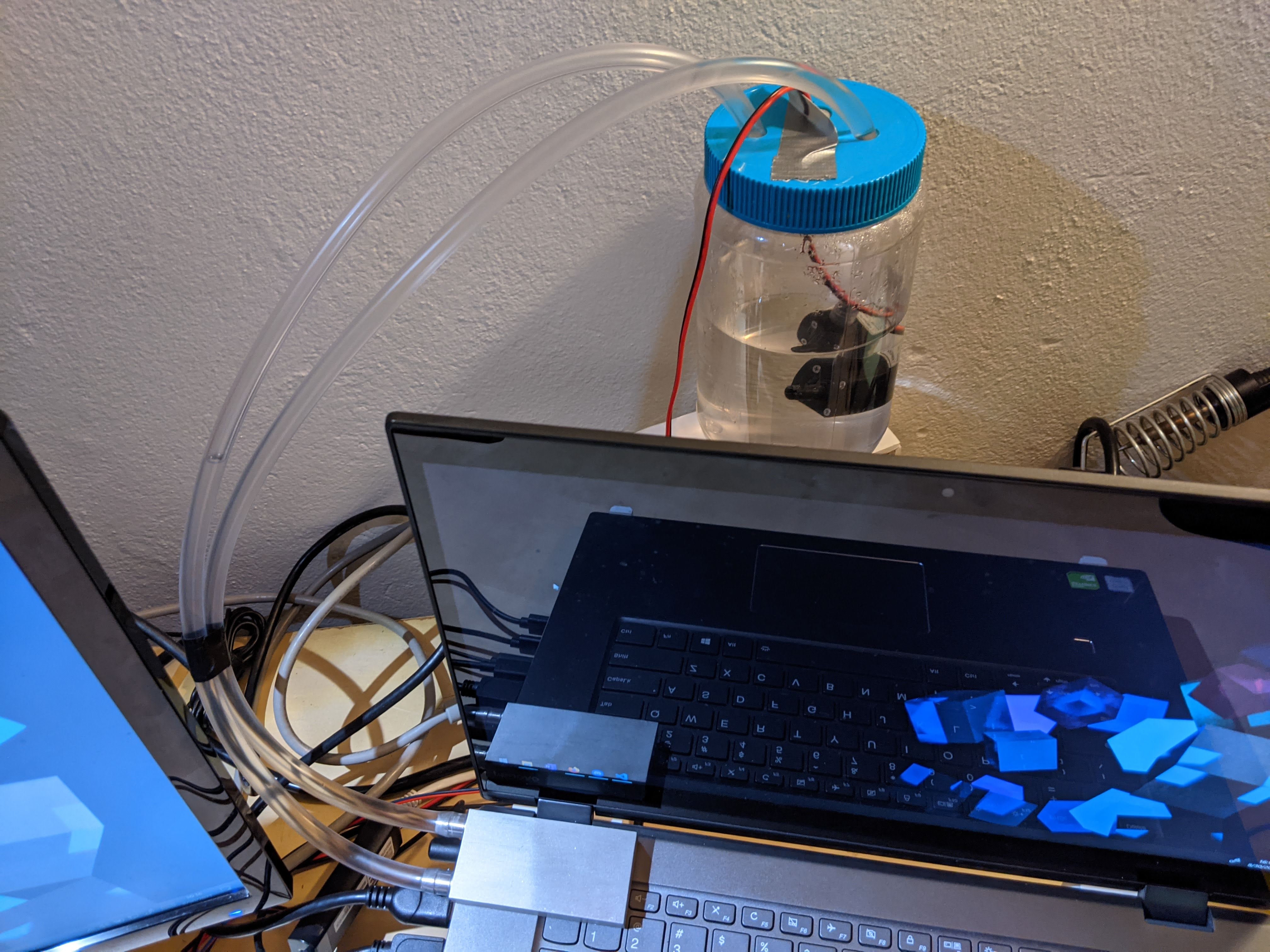 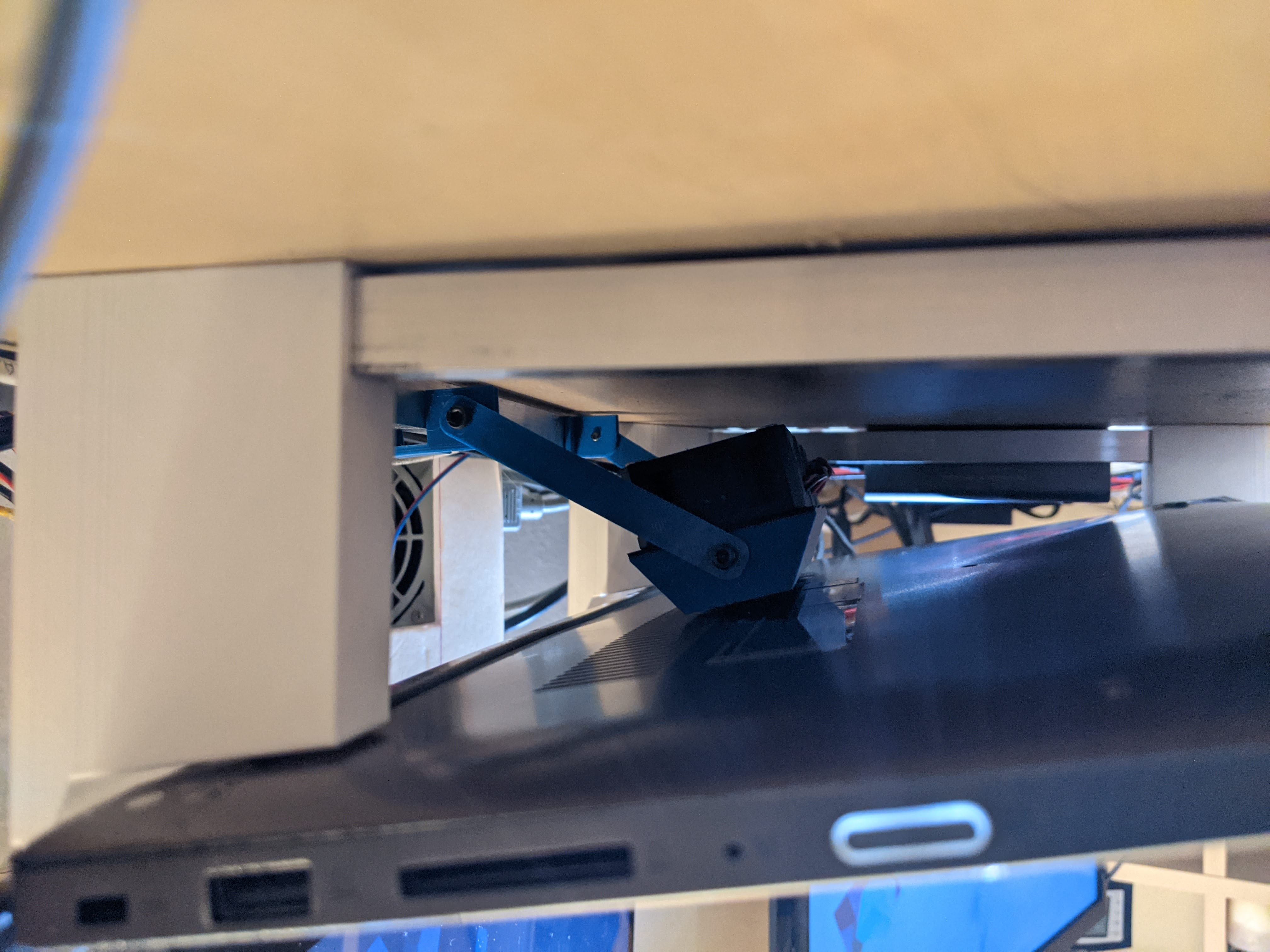 Another kind of rough spot is the battery life. I don’t actually remember what it used to be, but I’m only getting like 2 hours out of it these days. I’m sure all the heat from gaming has degraded the cells, but its simply not a good look for the laptop. Some of my friends have even replaced the batteries from their lenovo Flex models.

Other weird thing: the single USB-C port on this device is only version 3.0. NOT version 3.1. This means NO DISPLAY THROUGH THE PORT, and NO CHARGING. That was a super annoying quirk, but again this was just around when USB-C was being introduced. Unfortunately, it means my docking situation involves four cables, power, HDMI, USB 3.0 adapter to ethernet, and USB-C for my peripherals. The 3.0 speeds with a keyboard and the ethernet started using all my bandwidth and eating keystrokes. Also means it only supports two displays, the built-in one and one external. 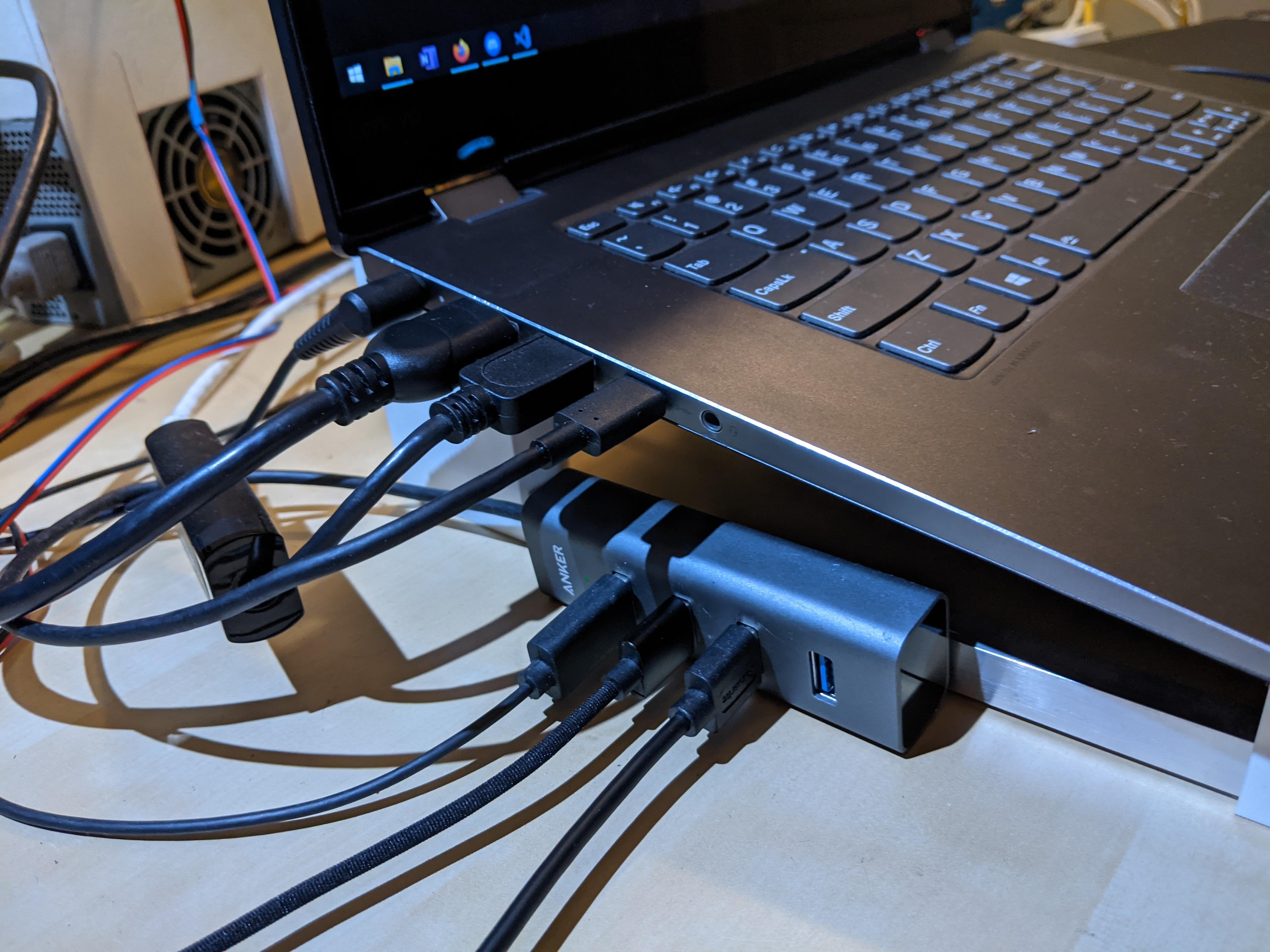 All in all. It was a good computer. I did what I needed to do (college) and played some fun games with friends. But its time for an upgrade. 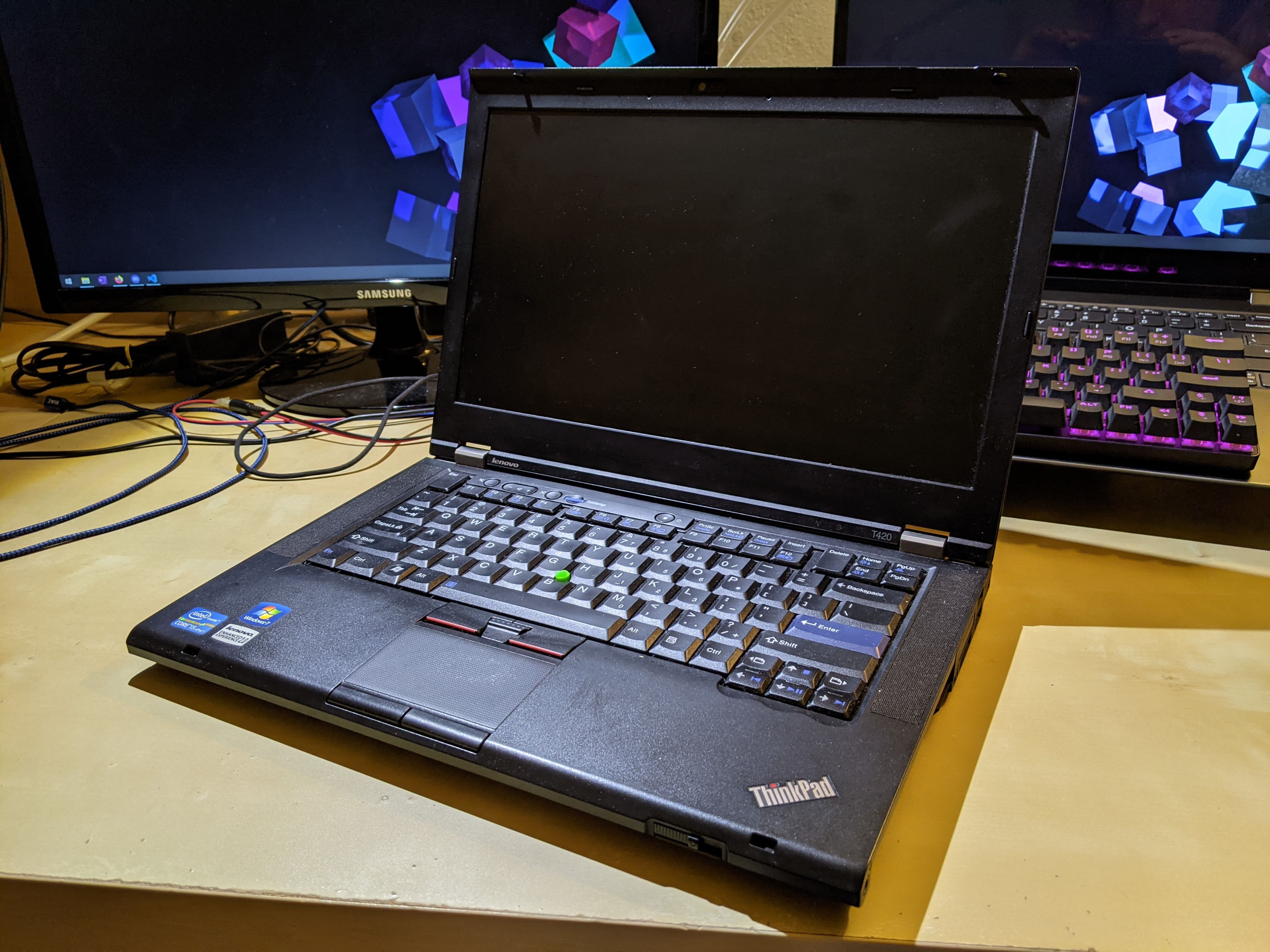 I was told in the syllabus for a class that I was taking in Fall 2020 that exams would be proctored through lockdown browser. I looked up the requirements, and it would not run if you had virtualization software installed on your computer. I of course use VMWARE pretty frequently, and think this is frankly ridiculous. Lockdown products are terrible and invasive. I had also been meaning to get a 64-bit laptop for experiments and stuff, as my last cheap craigslist buy turned out to be 32 bit. I compiled a couple dumb programs myself (as 32 bit isnt supported on linux anymore) before giving up and kinda setting it aside.

So, I went on Ebay and grabbed “the $100 laptop”, the T420. Heh. Weed. It showed up, I partitioned the disk in half, and put Ubuntu 20.04 on one half and left Windows 10 on the other. Great times all around. I installed Barrier and use it to make up my third and fourth monitors when I need it. Its really a great way to get around my 2 monitor hard limit on my Flex, and I figured out that three monitors is the best for productivity. One for messaging (Slack, Discord, Email), one for your main task (CAD, IDE, Word doc), and another for reference material (Web search, textbook, assignment sheet, etc).

The battery life isn’t great, but suprisingly its longer than my Flex. At about 3 hours, it has this weird thing where the battery meter goes down to 7% in about 45 minutes, and then stays there for the next 2 hours. Its a swappable battery, and my dad actually has a spare, but this one is in better health. I might make some changes to the battery monitor if i can, but for now I just wait until it drops to 5% and actually means the computer is about to lock up.

I don’t expect this device to be a workhorse. But it runs 64 bit linux on hardware, which is better and easier than any virtualization that I have on my Flex. It was a good descision. 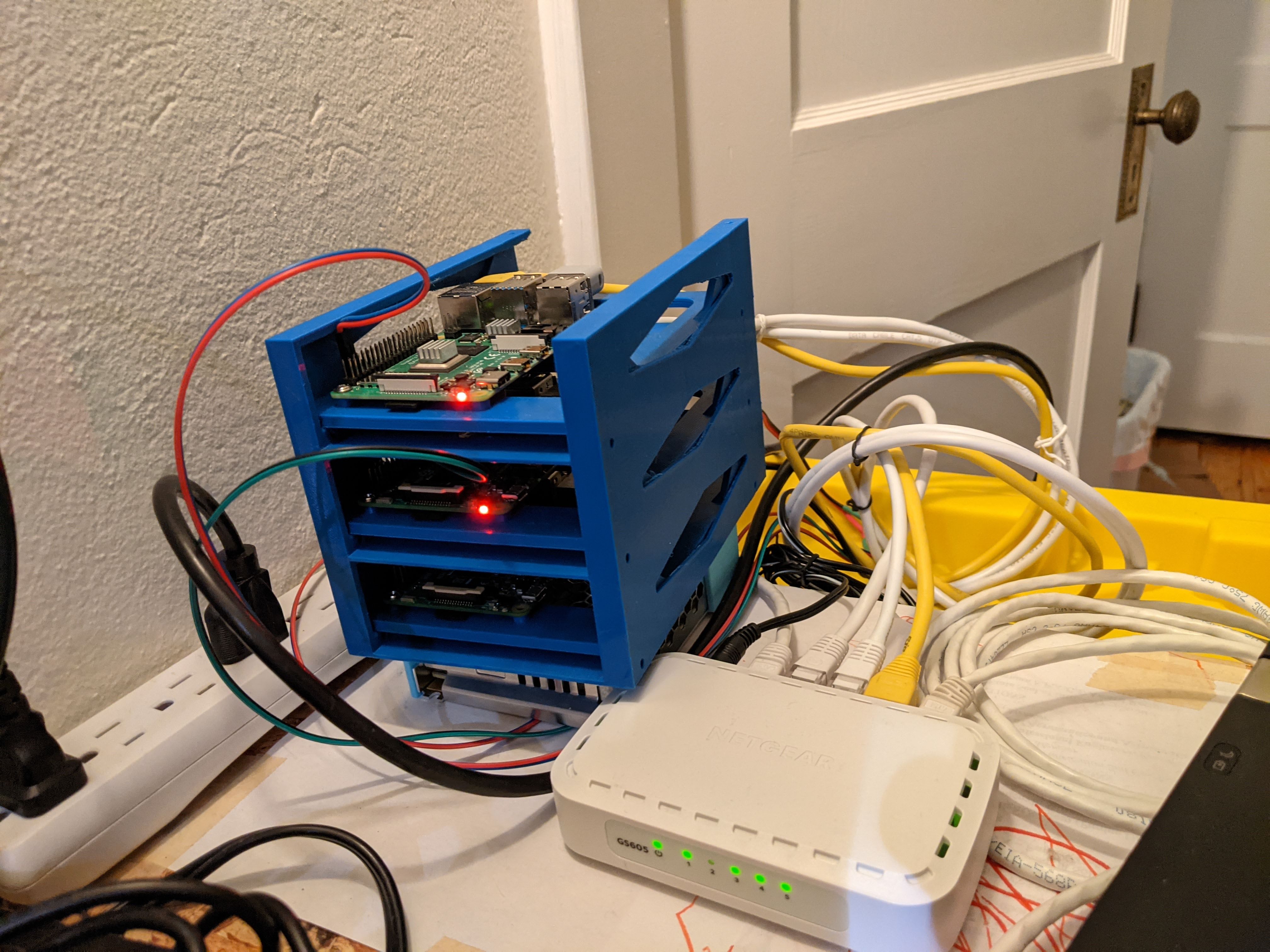 This device runs my OpenMediaVault NAS and my Wireguard VPN. I only have to open one port on the network so that devices outside of my network can connect to the VPN, and then I have full access to my files. It is really great, especially when using multiple computers and stopping relying on cloud services. I went and purchased an RPI 4B for this because this version has separate Ethernet and USB busses, and supports Gigabit ethernet and USB 3.0. This increases the data transfer speed significantly. I have a small heat sink on it, but it still gets a little warm when working hard. Ideal setup would include a fan and a UPS. Still have some work to do.

I have two of these currently in service. Both were grabbed from the E-waste bin at work, because they both have power management issues and no longer worked for their purpose. For some reason, they can only draw a fraction of the normal current before the board switches into undervolt mode. I haven’t looked into them too hard. However, their wireless functions are intact, so I have them set up to utilize this.

One of them runs the watering, lights, and webcam for my plants. There is a project post about it here.

The other is a portable, wireless MIDI keyboard synth. Just plug the keyboard into the RPI, flip the power switch, and it boots directly to a Sunvox session that is controlled by the surfaces on the keyboard. It broadcasts its own network, which you can connect to for additional configuration. Post in the works!

Same story with how I got these, from the E-waste bin. Some of these have broken Wi-Fi antennae, others have a similar power issue where they can’t draw a lot of current. They are all basically relegated to Ethernet-only, CLI-only operation and I have no problem with that.

One runs my 7 discord bots, as well as one for a friend. These are on 24/7, and also have occasional RSS feed updating to do. You can look at some of these bots on my github. The repo names are usually (something)bot.

One runs my matrix chat server, just as I set it up in this tutorial. I will be honest, it works better on an RPI4, but it would really work best on an actual server. This was more of a pet project and is currently offline at the time of writing.

Another is connected directly to my 3D printer and running Octoprint. This handy service allows me to manage print jobs much more effectively than without, as well as have a webcam and even control LEDs around the printer. I used to have this open so I could obsessively check my printer webcam feed when I was out of the house, but recently I made a discord bot so ALL my friends and I could obsessively check my printer while I’m gone. 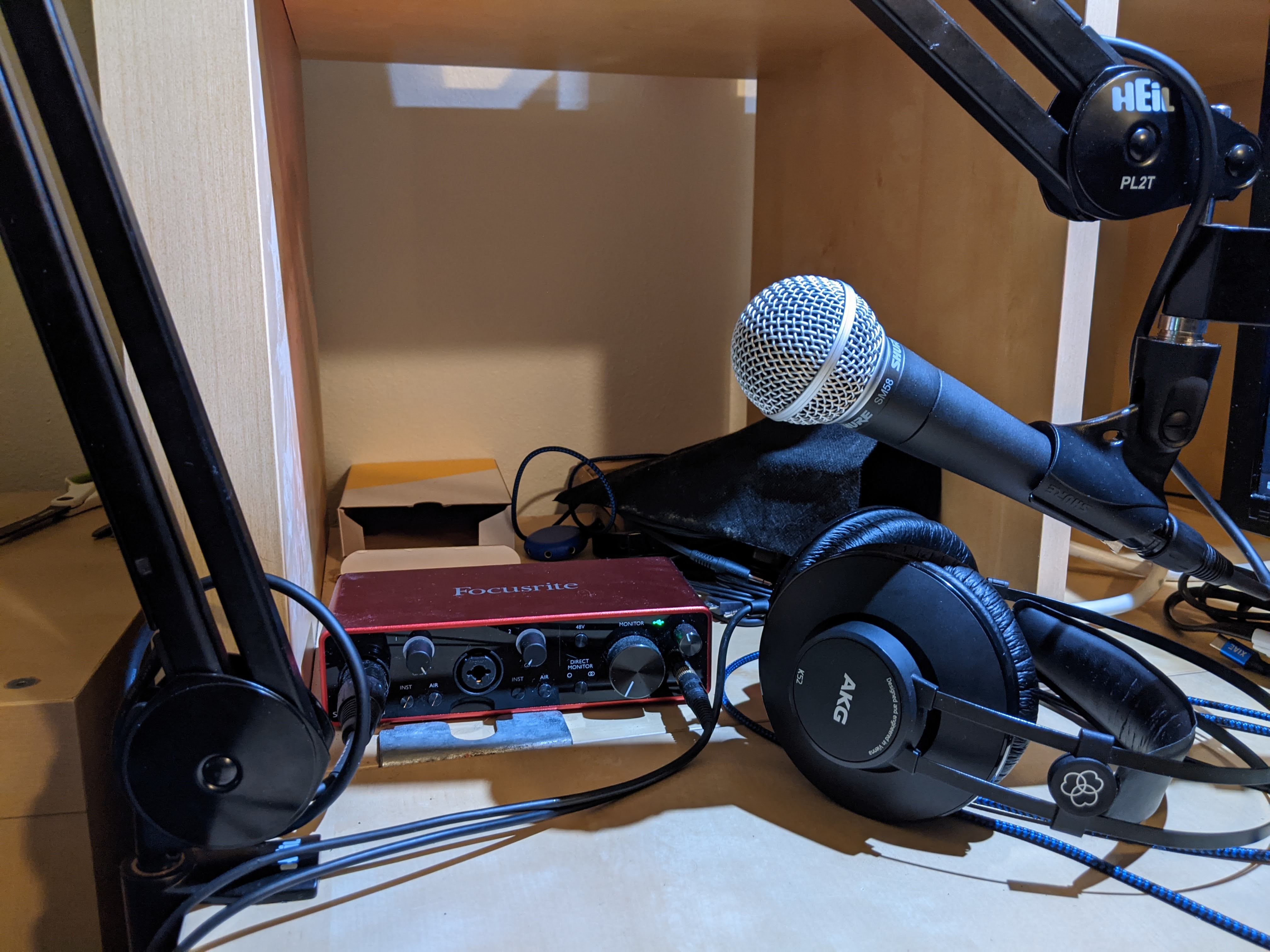 I like to record music and have good quality in VoIP calls.

What is there to say? They all work great. I get super low latency in Ableton, people tell me I sound like a podcaster over Zoom calls. The SM58 also technically has a pop filter built into it, but part of the mic arm setup is for appearances. I might get a dedicated desk mic and keep that in my road case for stage performances. 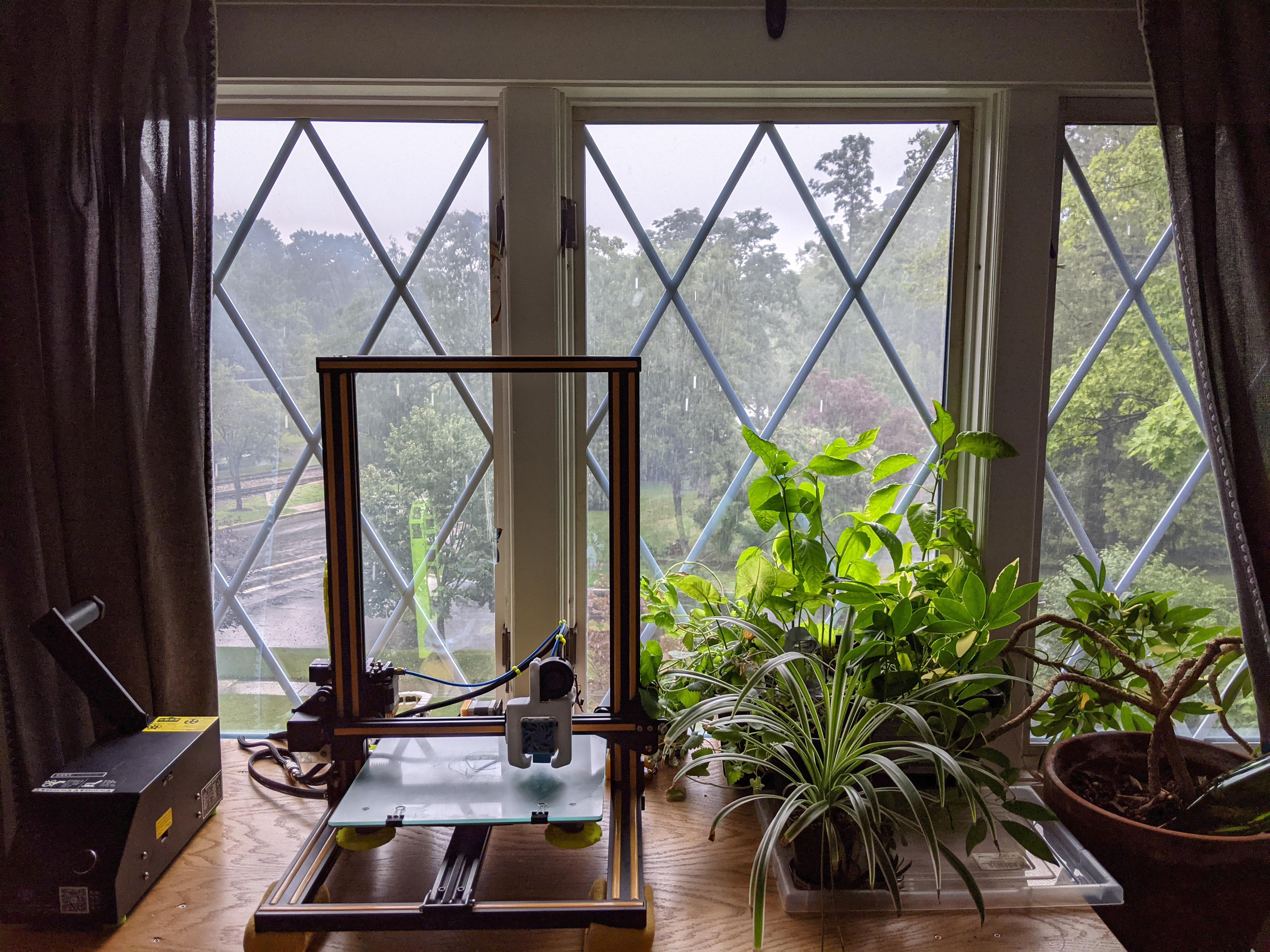 During my freshman year of college, my best friend Zach had a Robo3D printer that the two of us kept running basically 24/7 in his dorm room. It was super cool, but I knew I wanted to get my own that summer. So, I looked around for a good balance of quality and build volume. The CR-10S was the perfect printer for me, even though it wasn’t quite as good as some of the other smaller options. The 30x30x40 print volume is great for printing parts for cosplay and rocketry. It doesn’t have the great motor drivers like the Prusas do, but after replacing the fans and adding some dampeners, it was quiet enough to run in my dorm while my roommate and I slept.